Raghunath Mandir or Raghunath Temple is one of the most prominent temples and tourist spots of Jammu. This temple is located at the heart of the city and has many other temples for its company within close proximity. The area around the temple is always bustling with energy due to the constant influx of devotees to this temple. The ascent to the temple is also infested with many roadside shops and small eateries which serves the pilgrims with the necessities of food, water etc. 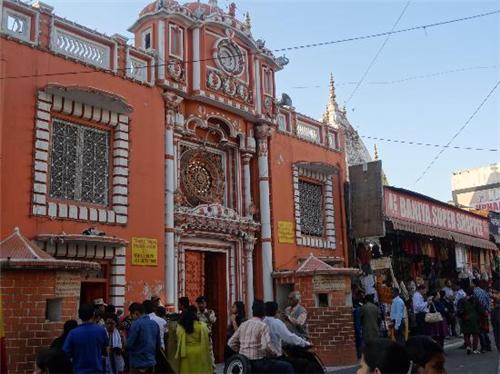 History of Raghunath temple in Jammu

This construction of this temple was commenced by Maharaja Gulab Singh, founder of the Kingdom of Jammu and Kashmir in 1835 AD and was completed by his son Maharaja Ranbir Singh in 1860 AD. This temple is dedicated to a Hindu God, named, Lord Rama who is an incarnation of Lord Vishnu. This temple possesses a rich history which is 130 years old.

Structure of Raghunath Temple in Jammu

This temple is humungous in size and has the rare distinction of being one of the largest temples in Northern India. The horizon of Jammu is often ornamented by the heart warming sight of the beautiful “shikhars” of this temple.

This temple has seven shikhars (spires), where every shrine has its own Shikhar.  A portrait of Maharana Ranbir Singh and an image of Lord Hanuman adorn the site at the very entrance of the temple.

The vital shrine is dedicated to Lord Raghunath/ Rama, who is the lead deity. Apart from the main shrine, the other shrines include various incarnations of Lord Vishnu. There is a shrine of Lord Surya (Sun God), which is another remarkable shrine. There are many idols of different forms of the God.

The interiors of the temple are a picturesque and it is worth mentioning that the interior walls of the temple are soaked in gold. Thus, the three sides of the temple are festooned with gold sheets. There are other shrines that shelter huge statues of the Hindu Gods and Goddesses. It also has a gallery, where various 'Lingams' (a worshipping  form of Lord Shiva) and 'Saligrams' are placed. Raghunath Temple consists of almost all the images of the Hindu Pantheon, which is quite exceptional. The environment is dipped in purity and the hearts are filled with reverence when one hears the morning and evening prayers which is called the “Aarti”.

Being one of the most prominent temples and places of worship, this temple has been a victim of a few terrorist attacks. The first attack occurred in March 2002 wherein, the terrorists killed many worshippers and a suicide bomber also injured many within the temple premises. The second attack took place in November’2002, when two suicide bombers stormed the temple and killed fourteen devotees and injured 45 others. Now the security has been tightened here for the visitors safety and since 2002 no attacks have occurred here.

Vicinity of Raghunath Temple in Jammu

The nearby area of the Raghunath temple provides a breathtaking scenic beauty and also has a market which is a shopper’s paradise. Also, this place has a number of budget and economical hotels for accommodation. There are also numerous, bakery, sweet shops and restaurants which churn out mouth watering vegetarian dishes, which are some unique gems from the authentic cuisine of Jammu.