Being one of the most popular tourist spots in the northernmost part of India, Jammu, provides a plethora of options to the tourists for sightseeing in the form of exquisite locals, elegant architectural design and spiritual solace in the form of numerous religious and holy places that are scattered in different nook and corners of Jammu. Jammu is a city with rich cultural heritage and is a witness to the great times of cultural influence of the different dynasties that ruled this place in the history.

One cannot help but notice the influence of the Dogra rulers in the making of some of the temples like the Peer Kho temple, Ramnagar temple etc. Also, there are some famous museums like the Amar Mahal Palace Museum, which gives us an insight on the affluent tradition, culture and historic extravaganza that Jammu was a privy to at one point in time in the erstwhile era. 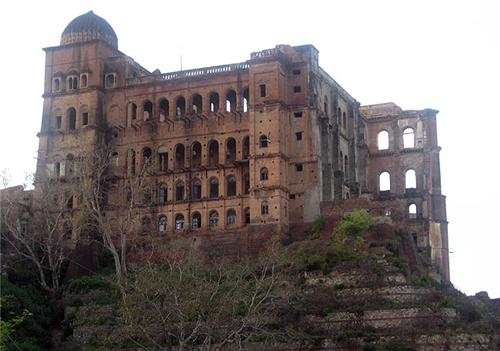 One of the architectural delights, which ooze exuberance and affluence in terms of architecture, is the Mubarak Mandi Palace Complex. This is perhaps one of the oldest buildings in Jammu and some of the chapters in history date back its existence in the year 1824. One of the principal elements of the history of Jammu, the Mubarak Mandi Complex in Jammu is a finely conserved Heritage Site of Jammu & Kashmir that engulfs within itself the richness of 150+ years of culture and tradition. This place has earned itself the distinction of being known as the royal residence of the Dogra Kings of Kashmir.

The lineage of being a place of strategic importance is still on as this Palace Complex in the present day is one of the key government centres, which shelters a number of government offices and courts that amounts to 76 in number, which includes one of the major government establishment which is the Royal Secretariat of Jammu. Thus, in the present scheme of things, it is one of the chief administrative centres of Jammu.

The city of Jammu is primarily divided into two sections by River Tawi with the Old City placed on one side and the New City on the other side. This splendid and ancient Palace Complex marvellously presents itself vertically along the perimeter of a towering cliff contained in the Old City of Jammu. The Mubarak Mandi Complex provides a fabulous view of the composed and grandiose River Tawi that gushes along one side while the New City of Jammu is magnificently placed over the other side of its riverbanks.

Thus, it can be remarked that the Mubarak Mandi Palace Complex was strategically constructed on the hillock to facilitate an incessant scenery view of the River Tawi flows on one side and being squeezed in between the old city of Jammu and the New City of Jammu on the other side, this place was much more secured against any attacks from the enemies, thereby it served as a fortress as well in times of need.

Standing tall with a rich history, that spanned over 150 years, this imperial building served as a massive palace and a stronghold of the kingdom, for the rulers of the Dogra dynasty.  It was rather the main place of the kingdom until 1925, after which Raja Hari Singh shifted the royal seat to Hari Niwas Palace in Northern Jammu.  The location of this building often proves to be a disadvantage to this grand piece of historic importance as it is very much prone to earthquakes and fires, as a result of which, parts of this building, like the Gol Ghar, are ruined and is found in rumbles, however, that also adds to the medieval feeling of this place. 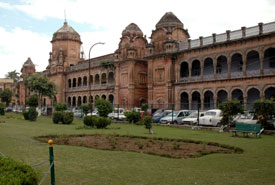 The Pink Hall, which is situated in the heart of the palace, was once used as the main hall by the Dogra rulers and it must have been an observer to the many meetings that the rulers and the kings of the Dogra dynasty would have conducted with the public and with the royal entourage. This hall has now been converted to a museum that has many noteworthy jewels from the history on display.

For instance, several miniature paintings of great historical emphasis and Emperor Shah Jahan’s golden bow and arrow, are on display here, along with many other interesting items and things, which belonged to the Dogra and the Mughal rulers. Therefore, this famous hall known as the Pink Hall, is presently the Dogra Art Museum or Dogra Art Gallery that holds a variety of miniature paintings depicting various Hill Schools while also exhibiting the extraordinary history, tradition, and culture of Jammu & Kashmir.

The Mubarak Mandi Complex buildings are consecutively spread around a large central courtyard that features a decked out lush garden. Apart from the offices, this Palace Complex also shelters comprehensive galleries and large halls that are widely used for hosting public events and official functions or ceremonies.

The architecture of the palace bears a stark resemblance and portrays a strong influence of the European Baroque, Mughal and Rajasthani styles, bringing to the foreground an exclusive combination of different cultures that adds a discrete temperament to both the palace and the scenic beauty of Jammu.

One of the most startling sections of the Mubarak Mandi Palace Complex is the Sheesh Mahal that literally means ‘The Palace of Mirrors’. Standing tall in its name this is a one and only Palace Hall, which is embedded with mirrors in varied shapes and natural designs, in totality.

There are some of the best hotels of Jammu, located in the vicinity and in close proximity to this Palace complex, where accommodation is economical and comfortable at the same time. Some of the famous hotels  are - Jehlum Resorts, Hotel Asia Jammu Tawi ,Hotel Katra Continental ,Country Inn & Suites by Carlson, AMR Lords Eco Inn, Hotel Bandhu ,Hotel Bandhu Palace, Hotel Bhawani International , KC Residency, Hotel The Vaishnodevi  and Hotel Mayur .

Therefore, in short, this marvellous Palatial Complex, known as the Mubarak Mandi Palace is a place to be visited on a compulsory basis by the visitors or the tourists, to experience the intricate, luxurious, and comprehensive design of the architectural grandeur that is embellished with extensively symmetrical enhancements and bears a testimony to the erstwhile architectural greatness, which cannot be spotted in present times. Also, a visit to the museum in it will provide one with great knowledge about the past.