The lake of Mansar is a gorgeous lake, which is laced with hills engulfed in forest, which is a mile long and half-a-mile wide.  Being at a distance of 62 kilometres from Jammu, this lake is a renowned and a popular expedition destination in Jammu, and is a religious site as well. The lake also shares the prodigy and holiness of Lake Mansarovar. This place is famous for its boating expeditions and the visitors here find a lot of solace and tranquility by just squatting by the lakeside.

The government of Jammu and Kashmir has invested a good number of resources in maintaining this place, as it has served as a tourist garnering spot. There are beautiful walkways made for the visitors with great illumination techniques and there are also pedestals or view stands from where a visitor could appreciate the boons of nature and watches the variety of seasonal birds, fishes and tortoise of different species which are regular habitants of the lake. 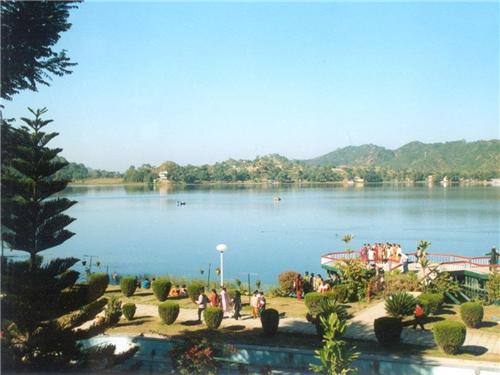 History of Mansar Lake near Jammu

The history of Mansar dates back to the time of Mahabhartata.  The son of Arjun and Ulpi, (who was the daughter of King Nag), named Babar Vahan, was the ruler of this region during the ancient times of Mahabhartata.  It was post the war, that Arjun who proved his mettle and superiority over this land by performing the Yagya named "Ashwamegh Yagya. The power symbol of Ashwamegh Yagya, which was a horse, was captured by Babar Vahan at village 'khoon' nearby village Ramkot on Dhar Udhampur road where later Arjun was murdered by Babar Vahan. Being victorious, Babar Vahan wanted to share his success with his mother and presented the head of Arjun to her.

It was then that she revealed that he had killed his father. After knowing the fact that Arjun was Babar’s father, he wanted to bring Arjun back to life for which he had to procure the Mani from Sheshnag. It was then that Babar Vahan made a tunnel with his arrow, which was called the “Surangsar”. This is now named as Surinsar. After defeating Sheshnag and capturing the Mani, he came out at Manisar which is known as Mansar now, which was the other end of the tunnel.

Attractions at Mansar Lake near Jammu

There are some famous temples which are situated near this lake and on the banks of this lake. A temple of a snake god, Sheshnag, is located on the banks of the lake. It is a customary belief that it is propitious for newlywed couples to seek blessings of Sheshnag by performing three Parikarma or a complete circling around the lake.  It is also a common belief that a dip in the lake of Mansar has the power to wash away all your erstwhile sins.

A temple of Durga and two other ancient temples of Narasimha and Parvathi Shiva (Umapati Mahadev) are located in the vicinity of the Mansar Lake.

There is also a wildlife sanctuary which is located nearby where one can catch a glimpse of rare species like Neelgai, Spotted deer etc. 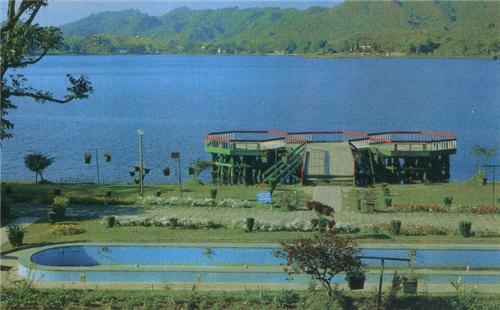 How to reach Mansar Lake near Jammu

Therefore, it is evident that the Mansar lake road joins to another important road that directly links Pathankot (Punjab) to Udhampur (Jammu & Kashmir, Jammu Province, thereby, making Udhampur a town of strategic importance which is on the periphery of National Highway No. 1A. There is also a shortcut route from Mansar or Samba to Udhampur, by dint of which the interior town of Jammu can be bypassed. Also, a smaller lake named the Surinsar Lake is linked to the Mansar Lake which is at a distance of 24 kilometres from Jammu.

All in all, it is a beautiful place to visit and your travel to Jammu should include this place in the list of places that you would want to visit for sure.