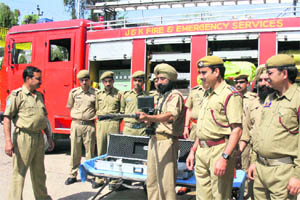 This establishment came into force in the year 1893 as Srinagar Fire Brigade. During its initial days some of the fire stations in some towns were staffed with only a few men.

This department has been rechristened to Fire and Emergency services due to the wide gamut of responsibilities that has been ushered in on them. Their scope of work encompasses the duties of rescue and fire fighting, disaster management, Rescue from earthquakes, floods, land slides, avalanches, catastrophes and conflagrations, road & rail accidents and Air crashes, under-water rescue besides man-made disasters like war, air raids and bomb blasts.

Here's the list of Fire Stations located in Jammu:

Other Details of Fire Stations in Jammu

Some other details of Fire Stations are as follows:

New Secretariat
No. of Fire Appliances:01

Shaheedi Chowk
No. of Fire Pumps:01


Thus, this department plays a major role in bringing back normalcy in the lives of the people after they have been hit with an unforeseen situation or a natural calamity.