Jammu is a land of festivities and celebrations. Being the “City of Temples”, there are many religious events which are celebrated on a large scale in Jammu. Also, the city of Jammu has people of many ethnicities co-existing in peace and harmony and they witness each others' festivals with great joy, delight and oneness.

The majority of Jammu's population practices Hinduism, while some fraction of the population also preach Islam and Sikhism, and thereby the region enjoys a strong cultural heritage.Therefore, the  major festivals that are celebrated are Baisakhi, Lohri, Navratri, Eid and many others which are of prime importance to the residents of Jammu. There are also major processions that take place during the festivals in Jammu. Let’s discuss some of the major festivals of Jammu at length. 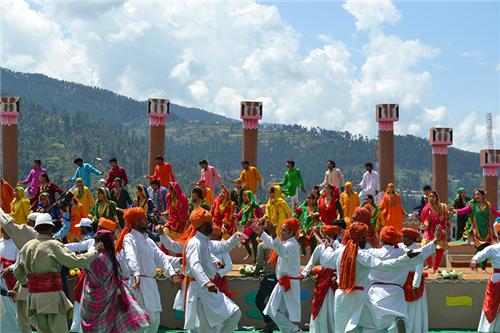 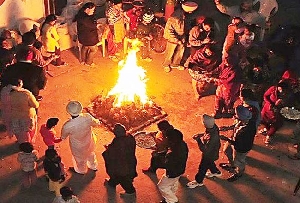 This is a very popular festival and this witness the dawn of merriment and joy across the city. The entire city glitters and sparkles on this day and is embellished in a celebratory look. The festival of Lohri also marks the onset of spring and is also known as Makar Sankranti in other parts of the country.

The celebrations of Lohri are characterised by the chanting of mantras of the 'Havan Yagnas' , which light up nearly every house and temple in Jammu. In addition, the rivers are swarmed by thousands of devotees who take a dip in the holy rivers. In the rural areas, it is a habitual norm that young boys to go around asking for gifts from newlyweds and parents of newborns.

A special dance called the 'Chajja' is performed on the occasion of Lohri. It makes a remarkable picture to see boys along with their 'Chajjas' ornately decorated with coloured paper and flowers dance on the street in a procession. The whole atmosphere becomes vivacious with heart pumping music of the drumbeats.

This is a major Sikh festival and as large parts of Jammu are inhabited by Sikhs, this festival is celebrated with huge merriment and a galore of enthusiasm. The festival is habitually observed on the 13th of April every year.  It is to celebrate the onset of harvesting season in Northern India. The day also witnesses the commencement of many fairs which run for a few days to a week. The day is also well-known for the birthday of the tenth Sikh Guru, Guru Gobind Singh. People visit the fairs during this festival and the volumes of shopping reaches sky limits during this time of the year. 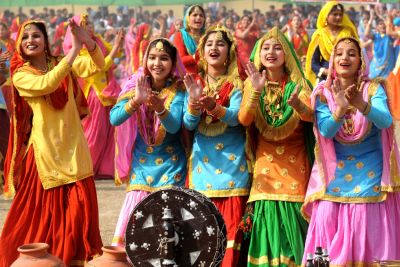 The name Baisakhi has got its roots  from the Vikram calendar and the name is a resemblance of the first month of this calendar. Every year, on the first day of ‘Vaishakh’ Jammu people celebrate Baisakhi. It is also lovingly called as the “harvest festival", and considered  as a propitious time or phase for marriages. It is a very common sight for the devotees to be taking a dip in the river and these devotees horde the rivers, canals and ponds. There is a huge section of the crowd, which go to the Nagbani temple to witness the grand New Year celebration.

The occasion is marked by grand celebrations of the New Year and it is captivating to watch the famous ‘Bhangra’ dance of Punjab. The Gurudwaras are full of people who come to listen to ‘Kirtans’, offer prayers and feast on the ‘Prasad’ from the common kitchen (‘Langar’).

Eid-ul-Fitr and Eid-ul-Azha are the most famous Muslim festivals. Eid-Ul-Fitr symbolises the end of the month of Ramadan. This is the month of fasting for the Muslims. During this day, the religious people offer Namaz six times, instead of the regular five times ritual. The day is very lucky for the entire Muslim clan and great festivities are witnessed by them in new clothes and fancy attires.

Eid-Ul-Azha is more important for the Qurbani (sacrifice). People sacrifice goats and sheep during this festival.

The Yatra to the shrine of Mata Vaishno Devi undertaken during the Navratras is considered the most auspicious, though the Yatra is allowed around-the-year. This festival is celebrated in the month of September-October. The State Tourism Department has instituted the Navratra Festival as an annual event to be held during September-October for all the nine auspicious days of Navratras, in order to display and emphasize the culture, heritage and traditions of the area during this period. A large number of pilgrims pay their genuflection to the deity during the Navratra festival. This festival brings to the forefront the culture and traditions of the region as witnessed by the millions of pilgrims who visit the Vaishnodevi Shrine during this festival.

All in all, the festivals in Jammu are the time that one should be there to witness the grand celebrations and have a wonderful time of merriment and joy.

Explore more about Culture of Jammu