Shopping runs in the DNA of many women and men, who are called “Shopaholics”. Though, shopping is considered to be an arena mainly dominated by women, however, with the changing times, and shifting of responsibilities, the men folk is also not lagging behind in dabbling in some window shopping. With the advent of shopping malls into the modern day city culture, the phenomenon of shopping has undergone a sea change and today one can afford to sift through different brands and different categories with a varied price range, all under one roof.

Buying a branded stuff has a thrill of its own and also promises of great quality and fashionable design. Shopping at a mall makes it easier for one and all to get branded merchandise within the least possible time. Also, there is no headache of bargaining or any negotiation, and one can try the dresses before making the purchase decision. All these benefits and more are brought to us, by the shopping experience at the mall. In addition, the safe ambience of the mall guarantees that one can have a good time along with his/her family and friends as it provides great entertainment value as well in the form of movie theaters and awesome restaurants. 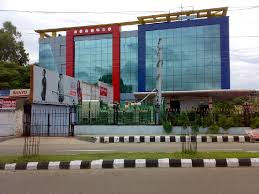 The First Shopping Mall of Jammu

Even the city of Jammu, today boasts of having its first mall which is called the City Square Mall. It is located in Dogra Chowk, at the centre of Vinayak Bazaar, which is a happening place of the Old Heritage city of Jammu. It operates from morning 10 o’clock till night 10 o’clock.  It was inaugurated in 2008 and was named as the Kashmir square mall, then, which was later renamed as the City Square Mall. The construction of this mall has placed Jammu, in the national map of trade and commerce in terms of national and international brands.

The mall meets its aim of bringing top global and national brands under one roof and the shoppers can shop for garments for men and women, including formal, casuals, western and ethnic Indian wear, household and home accessories at the mall. In addition, to shopping, the shoppers can also enjoy a sumptuous food spread at the food court, which houses some top restaurants and cafes. One can taste international standard food and beverages in the food court of the mall.

The various brands that are available in the mall include Levis, Denizen, Madame, Monte Carlo, The Numero Uno, Kapkids etc. Also, the various top class food joints that are available here include Dominos, Cafe Coffee day, Pizza Hut, KFC etc. The mall at times also has various rock bands performing there in order to promote their band or they just perform to entertain the crowd. There are times, when some fashion shows are also organised there.

This is one of the favourite places for the families to visit and this has been a weekend getaway spot designed for many from the last 6 years. The crowd here often witnesses a lot of youngsters hanging out in groups, while they have a nice time with their friends.

Explore more about Shopping in Jammu