The Amar Mahal Palace in Jammu is a landmark of sorts in the exotic landscape of Jammu. This erstwhile palace stands tall as a testimony to the grand French architecture. This palace has now been converted to a museum. This architecture was built in the nineteenth century for Raja Amar Singh, a Dogra king. This palace was an official residence of the Dogra dynasty and also shelters a number of ancient paintings and a collection of antique portraits of the royal family. The palace was contributed to the Hari-Tara charitable trust by Dr. Karan Singh for use as a museum. This place was built by a French architect, which aped the architecture of French cellar. 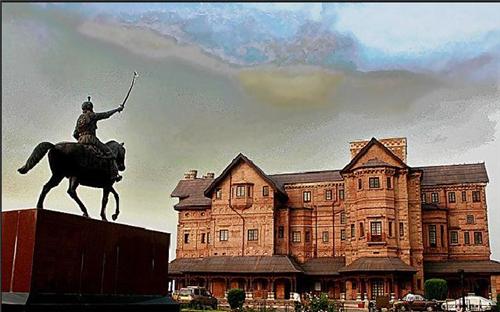 The right bank of the Tawi River has the grand palace of Amar Mahal situated on it. It is a picturesque situation as it has Sivalik Hills or ranges to the north of the Mahal, and on the left bank of the river, which provides a grand view, with the Tawi River flows in between, exhausting the valley.

The last resident of this palace was Maharani Tara Devi, wife of the late Maharaja Hari Singh (son of Raja Amar Singh) who lived in this palace till her death in 1967. Afterwards, her son Dr. Karan Singh and his wife Mrs. Yasho Rajya Lakshmi transformed the palace into a museum to accommodate rare books and works of art, with the objective of “Encouraging artistic talent, to establish a fine arts centre and to collaborate with other like- minded institutions for promotion of Indian arts”. It was at the behest of Dr. Karan Singh, that this palace was converted into a museum to promote young artistic talent.

He voluntarily surrendered the Privy Purse paid to him by the Government of India as a former ruler of Jammu, one of the Princely state of India, and used the finances to set up this museum named in reminiscence of his parents.  Late Mrs. Indira Gandhi, Prime Minister of India,   inaugurated the museum on April 13, 1975. In order to promote and adhere by the objectives with which the museum was established the Trust arranges guided tours, book readings, lectures, film shows and hobby classes and other visitor friendly activities in the Museum. The regular characteristics of the museum also include scholarly exchanges, workshops and exhibitions.

Displays of the museum in Amar Mahal Palace in Jammu

The museum houses some of the rare work of famous painters like M.F. Hussain, J. Swaminathan, G. R. Santosh, Bikash Battacharjee, Ram Kumar and Laxman Pai. At the entrance gallery, is the Durbar hall, which displays the family portraits of the Dogra rulers. Hindu epic scenes from the Mahabharata and epic stories like Nala Damayanti are depicted in the paintings of this museum.

This museum is also an abode to the golden sofa of the Dogra rulers, weighing 120 kg in pure gold, entrenched with golden lions at the corners. It is placed in a hexagonal room in the museum, which is viewed only through a glass covered window panes as the main door is kept locked for security reasons.

There is also a library in the first and second floors of the museum, which stores a distinctive collection of antique books on political science, fiction, religion and philosophy. 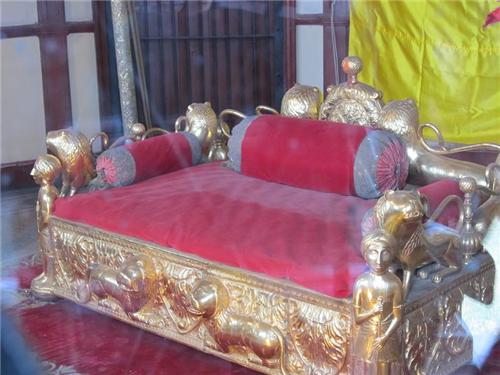 The design, architecture and construction of this palace is very distinct and uncommon. It is built with red bricks and red sandstone and is ideally placed on a hillock which oversees the Tawi River. The striking building has long channels on three sides, which are covered by sloping ridged tin roofs. The passages are sustained on columns with wooden framework. The first floor and the top floor of the palace building have French windows with connected balcony and a bay window, respectively. Classical Greek architectural style is evident in the windows which portray triangular projections.

The Hari Niwas hotel is at a stone’s throw distance from this palace and if you choose this hotel as your accommodation, travelling to the Amar Mahal Palace will be only a few minutes affair.